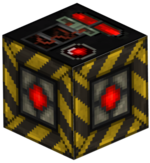 Operators of a server can type /icbm lag RADIUS_OF_EFFECT command to remove Red Matter and stop the explosion from happening.

Red matter explosive is crafted from a material known as Strange Matter combined with the Antimatter Explosive.

Once activated, the Red Matter explosive will start an 8-second countdown before finally exploding. The initial blast isn't very powerful; having only an 8-block radius similar to TNT, but it leaves a powerful black hole in its wake, measuring 16x16x16 blocks in size, with a vivid blue halo and beams of light issuing from the center, as well as an eerie sound like howling wind. It then proceeds to suck up every block nearby, slowly peeling away layer after layer of blocks one by one until it has consumed every block within 32 meters, often leaving a massive crater. In addition, it will also suck up any mobs, players, or dropped items within 50 meters, as well as projectiles such as splash potions or arrows. Nearby liquids will flow normally, although liquid source blocks will be consumed as well. Only bedrock is unaffected.

Anything pulled into the black hole will spiral around the hole's center before finally exploding. They are also prone to injuring mobs and players, as well as "sticking" to floors and walls outside the black hole's gravity well (Note: having loads of objects orbiting the black hole can cause severe framerate drops). The gravitational pull of the black hole becomes stronger the closer one is to the center, although players can easily escape by running in the opposite direction, thus a Potion of Swiftness can be handy in this case. While being less than 32 meters away from the black hole can send a player spiraling up and out of control, the actual event horizon (the point where escape is impossible, even with a Swiftness II potion) is only 2 meters from the center.

The black hole will stay active indefinitely, and the only way to permanently destroy the black hole is by detonating an antimatter explosive nearby and letting it get sucked in. Any other explosive (including the blast given off by the Wither after being summoned) will simply send the black hole flying off in the opposite direction of the blast. This can also get rid of the black hole if it ends up flying upwards into the sky, but it can end up making a bad situation worse if it ends up going sideways or down; as the black hole carves an endless path of destruction, sucking up everything in its path. The more powerful the explosive, the faster the black hole will travel. If two or more red matter explosives are detonated near one another, both black holes will "fight", slinging each other around and around in wild, unpredictable patterns. This usually ends up with either both black holes annihilating each other or flying off into the sky.

Damage created by the explosive can easily be fixed by the Rejuvenation Explosive. This explosive is recommended for players who are either the owner of a server, or have permission from an admin. This explosive is banned on most servers due to its potentially apocalyptic behavior. Possible uses for this behavior are: Creating a giant crater. Exposing MANY ores. Exposing MANY caves. Building a home out of the crater and escape tunnel.