This article is a stub. You can help us by expanding it

The explosives and missiles in ICBM are quite devastating. To protect your home (and yourself) from the dangers of intercontinental war you can set up various defensive systems. This article will teach you how.

Various materials are more resistant to explosives than normal building materials. Use concrete, or blast proof walling to protect from smaller missiles or explosives. Also see the Advanced Defense Tutorial

To get rid of missiles targeted at you, you must first detect them. This is done with a Radar Station. Another fantastic way to prevent damage to your base is to just plainly not be detected. Using Camoflauge will prevent your base from being detected. Be warned, if an EMP goes off next to it, it cancels all the camoflauge in an area.

A Radar Station detects incoming missiles as well as other radar stations, emp towers or planes. When a missile is targeted into the safe zone of the radar it emmits a redstone pulse (see Radar Station for details how to set it up.)

The redstone signal can then be used to activate your countermeasures. There are four main ways of setting up a defense system, as follows:

The Moduar Force Field provides a good way to shield your base from any explosives. To reduce power consumption you can switch it on when detecting any hostile missiles.

This is a missile which is used to shoot down other missiles. This means that if you connect it to your radar you can make it be automatically launched when your radar detects an enemy missile which means that no missile can attack you. Also see the Advanced Defense Tutorial

Note: The radar doesn't provide any targeting information so you have to take care where to aim the missile to get it near the incoming explosive.

Note: this refers to the EMP Tower, not the EMP Explosive.

Set up your EMP tower with a sizable energy source (i. e., Fulmination Generator, Fusion/Fission generator). It is suggested that you set it to only disrupt missiles, so your energy stores will still be intact. Also note that the Radar station should be set to 'output redstone on all sides: true'. Also, to help against a multi-missile attack, set up another EMP tower inside with a slight delay on it to get rid of as many missiles as possible.

The EMP needs some time to recharge, depending on blast radius, potentially leaving you vulnerable to a second missile in the meantime. 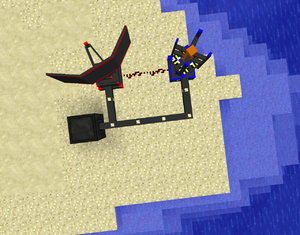 Note: this refers to MFFS.

One of the oldest ways, you just dig a deep hole in the ground and hide there. Some pros/cons with this setup are: