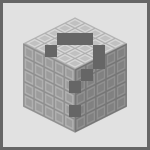 The Laser Turret is an AI operated turret which automatically attacks mobs and players. It does not need bullets, as it uses electricity instead(20kJ per shot) and sets mobs and players on fire. It uses the Turret Platform. If the colors on the gun are green, then it is friendly to you. If it is red, then it is hostile, and will fire on you.

It has a longer range and faster firing rate than the normal Gun Turret. However, it only inflicts 2 damage {{hp|1}, while the gun turret has >7 damage (3.5 (