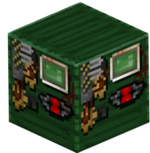 With the new Minecraft 1.4 release came a deadly new weapon - the Anvil. So, what happens when you mix shrapnel explosives with anvils? You got it. This acts the same as a shrapnel explosive, except it doesn't shoot flaming arrows. Instead, it blasts out a cloud of anvils, each one capable of dealing massive amounts of damage. These explosives can be combined with the Repulsive Explosives to create a rain of instant-kill projectiles. Despite its tier-one classification, the Anvil Explosives costs a lot to make, so don't get any thoughts about making some in early game.