This tutorial assumes you have completed the Getting_Started_Guide:

Mining with explosives is very rewarding. You can clear a lot more area than with regular mining, and it's only slightly more dangerous. The basic strategy is to set up a Breaching Explosive against a wall, and detonate the explosive with the Remote Detonator.

You get much more ore much quicker than using a tool, and the materials are fairly abundant (Sulfur, Sand, and Charcoal)

First thing to do is create a Remote Detonator. You can do with with a single diamond, a single redstone, seven iron, and a half stack of coal, so make sure you have at least one diamond and the rest of the materials.

Place the Remote Detonator into the Battery Box to charge it. (the one you created in the Tutorials/Getting_Started_Guide.

The second thing to do is create some Breaching Explosives. They are very effective in mining, as they clear a 10x5 corridor, and drop every block. They can even destroy lava source blocks! 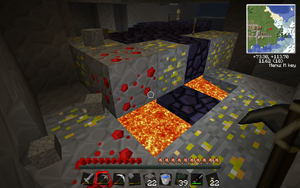 Sulfur is the yellow ore that can be found underground near lava pools, so it can be dangerous to mine if you aren't careful. Fortunately, the sulfur tends to pop upwards so you can usually mine it while hanging over lava and not burn.

Usually. Carry a bucket of water just in case.

A bucket of water is also useful for turning the lava into Obsidian, making it much easier to mine around. 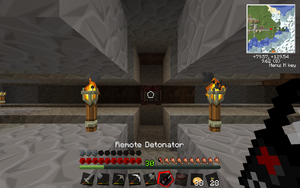 Place the breaching explosive against the wall you want to blow up, get far away, and aim the remote detonator at the explosive. 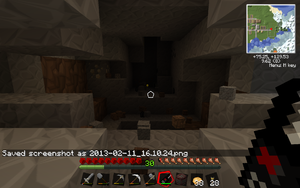 Hit the detonator, it's range is line of sight, so you can get as far away as you want.